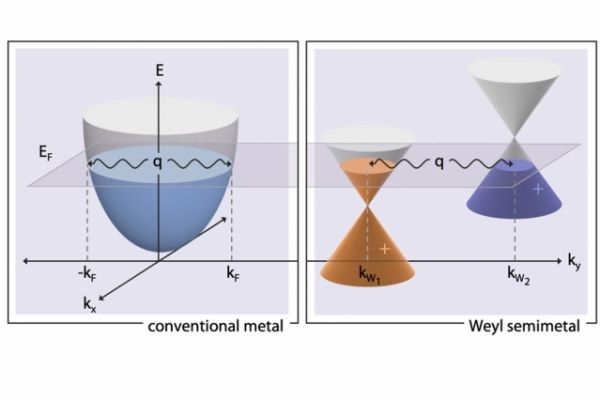 An exotic physical phenomenon known as a Kohn anomaly has been found for the first time in an unexpected type of material by researchers at MIT and elsewhere.

An exotic physical phenomenon known as a Kohn anomaly has been found for the first time in an unexpected type of material by researchers at MIT and elsewhere. They say the finding could provide new insights into certain fundamental processes that help determine why metals and other materials display the complex electronic properties that underlie much of today’s technology.

The way electrons interact with phonons — which are essentially vibrations passing through a crystalline material — determines the physical processes that take place inside many electronic devices. These interactions affect the way metals resist electric current, the temperature at which some materials suddenly become superconductors, and the very low temperature requirements for quantum computers, among many other processes.

But electron-phonon interactions have been difficult to study in detail because they are generally very weak. The new study has found a new, stronger kind of unusual electron-phonon interaction: The researchers induced a Kohn anomaly, which was previously thought to exist only in metals, in an exotic material called a topological Weyl semimetal. The finding could help shed light on important aspects of the complex interplay between electrons and phonons, they say.

Image: Diagram depicts the different conditions that give rise to a Kohn anomaly in ordinary metals (at left), versus a material called a Weyl semimetal (at right). The vertical axis shows energy, while the horizontal axis is momentum space. In the conventional metal, a Kohn anomaly can happen when a phonon (q) links two parts of a property called the Fermi surface, which is shown in blue. In the Weyl semimetal, the Kohn anomaly arises when the phonon links two separate Weyl points (kw1-kw2).

Image courtesy of the researchers