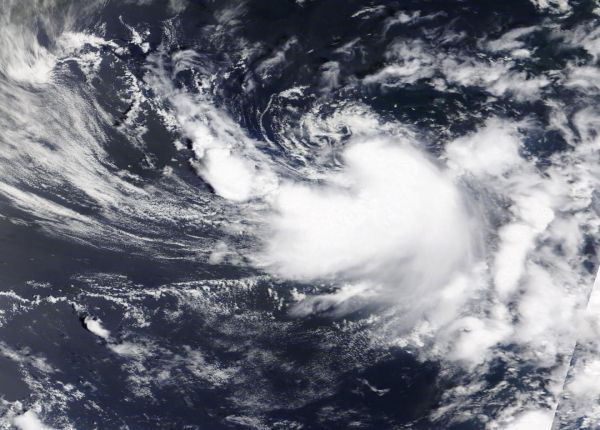 During the morning of June 23, the fourth system in the Northern Atlantic Ocean was a subtropical depression.

At 1 p.m. EDT (1700 UTC), the National Hurricane Center (NHC) classified Dolly as a tropical storm. The NHC Discussion said, “A (9:48 a.m. EDT) 1348 UTC an ASCAT-A scatterometer [a satellite instrument that measures wind speed and direction] pass, arriving just after the previous advisory was issued, indicates that the cyclone is producing winds of 35 to 40 knots (40 to 46 mph/65 to 74 kph) in its southern semicircle. In addition, the radius of maximum winds has contracted to about 40 nautical miles. This, along with the current convective pattern, suggests that the system has made a transition from a subtropical to a tropical cyclone, and it has been designated as Tropical Storm Dolly.”

The center of Tropical Storm Dolly was located near latitude 39.4 degrees north and longitude 61.7 degrees west. That is about 370 miles (600 km) south-southeast of Halifax, Nova Scotia, Canada. Dolly was moving toward the east-northeast near 13 mph (20 kph). A turn toward the northeast with an increase in forward speed is expected tonight and on Wednesday, June 24.

Satellite-derived wind data indicate that maximum sustained winds have increased to near 45 mph (75 kph) with higher gusts. Tropical-storm-force winds extend outward up to 70 miles (110 km) to the south of the center. The estimated minimum central pressure is 1002 millibars.