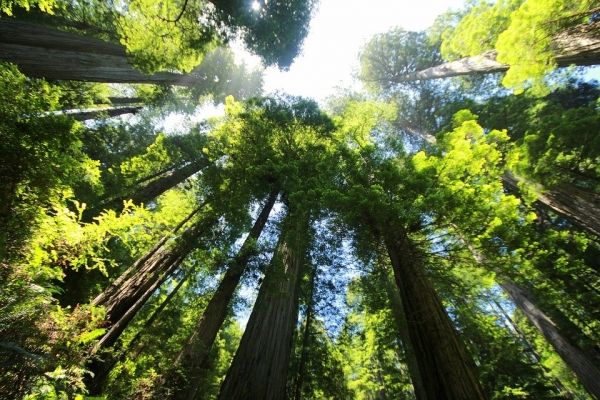 Throughout California, the effects of climate change are evident, from increasing frequencies of intense wildfires and mudslides to widespread and prolonged droughts.

Throughout California, the effects of climate change are evident, from increasing frequencies of intense wildfires and mudslides to widespread and prolonged droughts. These changes also threaten one of California’s most iconic endemic species: coastal redwoods. Coastal redwoods are not only some of the tallest and oldest trees on Earth, but redwood forests are also capable of storing three times more carbon than any other forest. Identifying suitable habitats for these vulnerable species has important implications for carbon sequestration and redwood forest biodiversity. This is especially urgent given that some regions within the current redwood distribution in California (south of San Franscisco Bay) could become unsuitable for redwoods as soon as 2030.

“Habitat suitability of coast redwood has been studied before, but not using high-resolution data at the landscape scale," said Emily Francis, lead author of the study. "The approach we employed here could be applied in other forest types to gain new insight into the role of moisture availability in landscape-scale patterns of habitat suitability for many tree species that may be vulnerable to climate change.”

The research was conducted in three redwood forests in California spanning approximately one-third of redwood latitudinal range. After analyzing spatial patterns in redwood distributions over more than 34,800 hectares (87,000 acres) across the three forests, the scientists found that redwood habitat suitability significantly varied in relation to moisture availability and fog across different landscape elevations. Redwood habitats were consistently more suitable at sites located closer to streams. The study also found that habitat suitability for redwoods ranged from 22%-75% within a single landscape, underlining the importance of considering landscape-scale variation while identifying sites that will continue to be suitable for redwoods, even as surrounding areas become inhospitable due to climate change.