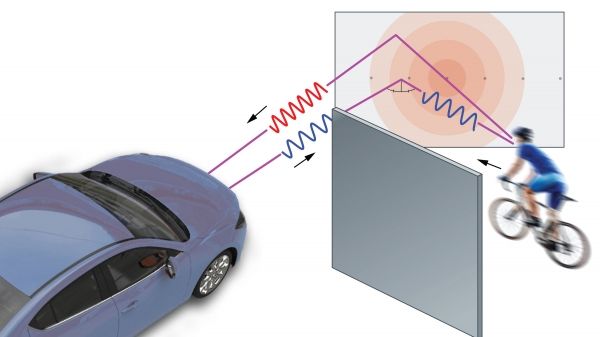 Using radar commonly deployed to track speeders and fastballs, researchers have developed an automated system that will allow cars to peer around corners and spot oncoming traffic and pedestrians.

Using radar commonly deployed to track speeders and fastballs, researchers have developed an automated system that will allow cars to peer around corners and spot oncoming traffic and pedestrians.

The system, easily integrated into today's vehicles, uses Doppler radar to bounce radio waves off surfaces such as buildings and parked automobiles. The radar signal hits the surface at an angle, so its reflection rebounds off like a cue ball hitting the wall of a pool table. The signal goes on to strike objects hidden around the corner. Some of the radar signal bounces back to detectors mounted on the car, allowing the system to see objects around the corner and tell whether they are moving or stationary.

"This will enable cars to see occluded objects that today’s lidar and camera sensors cannot record, for example, allowing a self-driving vehicle to see around a dangerous intersection" said Felix Heide, an assistant professor of computer science at Princeton University and one of researchers. "The radar sensors are also relatively low-cost, especially compared to lidar sensors, and scale to mass production."

In a paper presented June 16 at this Conference on Computer Vision and Pattern Recognition (CVPR), the researchers described how the system is able to distinguish objects including cars, bicyclists and pedestrians and gauge their direction and oncoming speed.

"The proposed approach allows for collision warning for pedestrians and cyclists in real-world autonomous driving scenarios — before seeing them with existing direct line-of-sight sensors," the authors write.

Image: Researchers combined artificial intelligence and radar used to track speeders to develop a system that will allow vehicles to spot hazards hidden around corners. Image courtesy of the researchers.