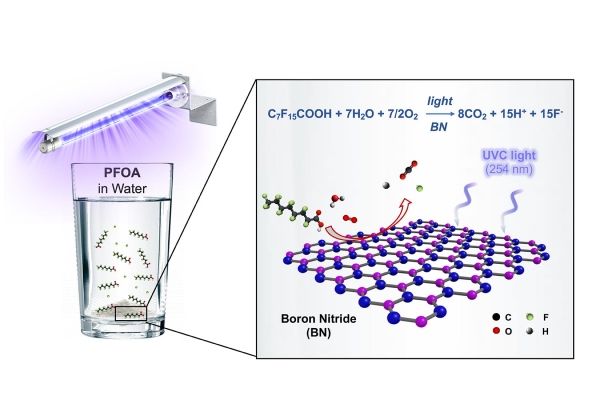 “It was the control,” said Rice Professor Michael Wong, referring to the part of a scientific experiment where researchers don’t expect surprises. The control group is the yardstick of experimental science, the baseline by which variables are measured.

“We haven’t yet tested this at a full scale, but in our benchtop tests in the lab, we could get rid of 99% of PFOA in four hours,” Wong said of boron nitride, the light-activated catalyst he and his students stumbled upon and spent more than a year testing.

Their study, which is available online in the American Chemical Society journal Environmental Science and Technology Letters, found boron nitride destroyed PFOA (perfluorooctanoic acid) at a faster clip than any previously reported photocatalyst. PFOA is one of the most prevalent PFAS (perfluoroalkyl and polyfluoroalkyl substances), a family of more than 4,000 compounds developed in the 20th century to make coatings for waterproof clothing, food packaging, nonstick pans and countless other uses. PFAS have been dubbed forever chemicals for their tendency to linger in the environment, and scientists have found them in the blood of virtually all Americans, including newborns.

Image: An illustration of the boron nitride photocatalysis that destroys the pollutant PFOA in water. (Image courtesy of M. Wong/Rice University)