Details
University of Hawaiʻi at Mānoa 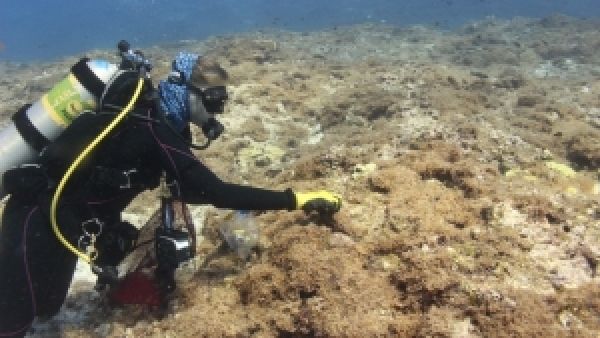 A newly-identified, fast-growing species of algae poses a major threat to coral reefs and the ocean ecosystem.

It was previously discovered in Papahānaumokuākea Marine National Monument by a team of researchers from the University of Hawaiʻi, Western Australian Herbarium, College of Charleston and National Oceanic and Atmospheric Administration (NOAA).

Newly-named Chondria tumulosa by UH researchers, the alga has no known origin and has been observed smothering entire reefs and the corals, native algae and other organisms that live in one of the northern atolls. It also has a “tumbleweed-like” growth and appears to easily detach and spread.

“I think this is a warning of the kinds of changes that are to come for the northwestern Hawaiian Islands,” said UH Mānoa College of Natural Sciences Interim Associate Dean and Professor Alison Sherwood, the lead researcher on the project. “We have, not until now, seen a major issue like this where we have a nuisance species that’s come in and made such profound changes over a short period of time to the reefs.”

Continue reading at University of Hawai'i at Mānoa

Image via University of Hawai'i at Mānoa