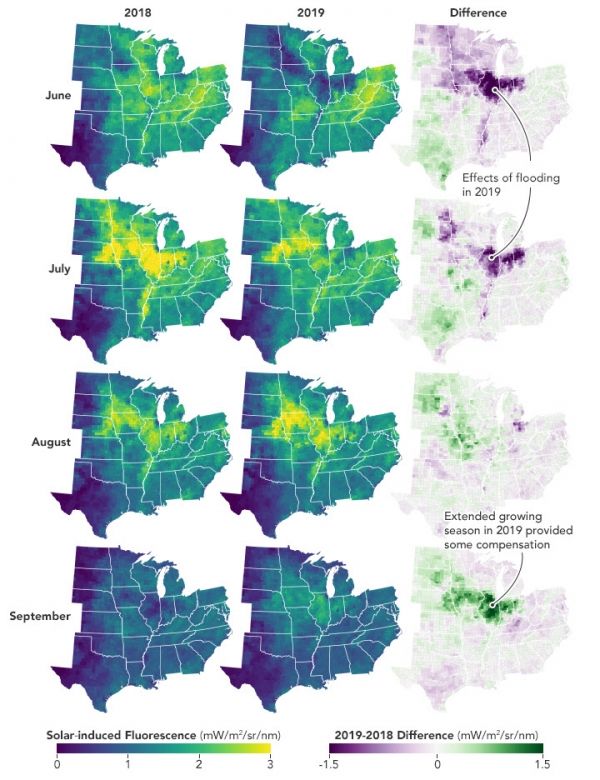 As scientists detect plant fluorescence in better detail, they inch closer to helping farmers respond to extreme weather and close in on understanding how carbon cycles through ecosystems.

It might sound like science fiction, but the U.S. Midwest literally glows during the growing season. The glow—emitted by healthy, productive plants all over the world—is far too dim to be seen with the naked eye. In recent years, however, scientists have worked on detecting this signal using satellites. And they’re using it to make some remarkable observations.

When a plant is performing photosynthesis—absorbing sunlight to convert carbon dioxide and water into food—its chlorophyll will “leak” or emit some photons during the process. This faint glow is called “solar induced fluorescence,” or SIF. The glow is directly related to the biochemical processes happening inside the plant, so scientists can use it as a proxy for plant productivity. The higher the fluorescence from a plant, the more carbon dioxide it is taking from the atmosphere to fuel its growth.

Because fluorescence offers a direct view into the photosynthetic machinery of plants, scientists can use it to detect nuances in the growing season that might be missed by other methods that rely on changes in vegetation color, or “greenness.”