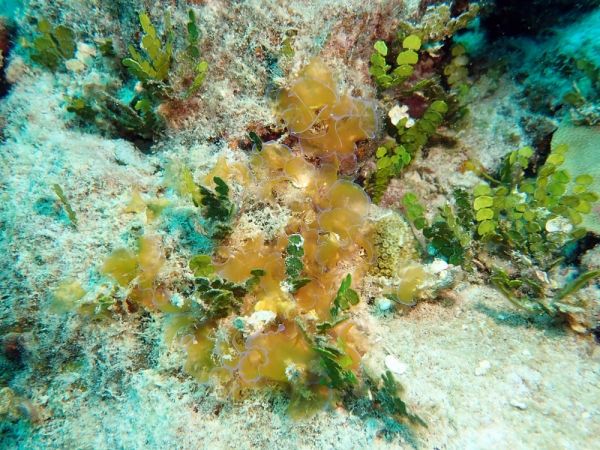 In three years, the alga had grown into abundant mats of over 100,000 square feet each at Pearl and Hermes Atoll, outcompeting the species typically living in these ecosystems.

In August 2019, researchers took a dive at Pearl and Hermes Atoll (Manawai) in Papahānaumokuākea National Marine Monument. At about 40 feet below the surface, they expected to see brilliant pinks and greens, characteristic of native stony corals. Instead, they saw mats of a red alga they did not recognize, stretching for the length of football fields and smothering the native corals. Not only were colorful corals not in sight; none of the usual grazing fishes, such as parrotfish, were nearby.

A NOAA diver swam closer to this unexpected landscape and began to tug at the mat-forming algae. Pulling it upward, the research diver discovered that the once vibrant corals were now only skeletons. No native algae other than cyanobacteria were growing under the mats. The research task became clear: they needed to identify this unfamiliar algal species that was outcompeting the native species in the monument.

Nearly a year later, after extensive molecular and morphological analyses, researchers have determined that this mat-forming algae was an undescribed species. Newly named as Chondria tumulosa, the alga’s origin is unknown. Though it is possible that the alga is native, it nevertheless exhibits alarming invasive-like qualities.