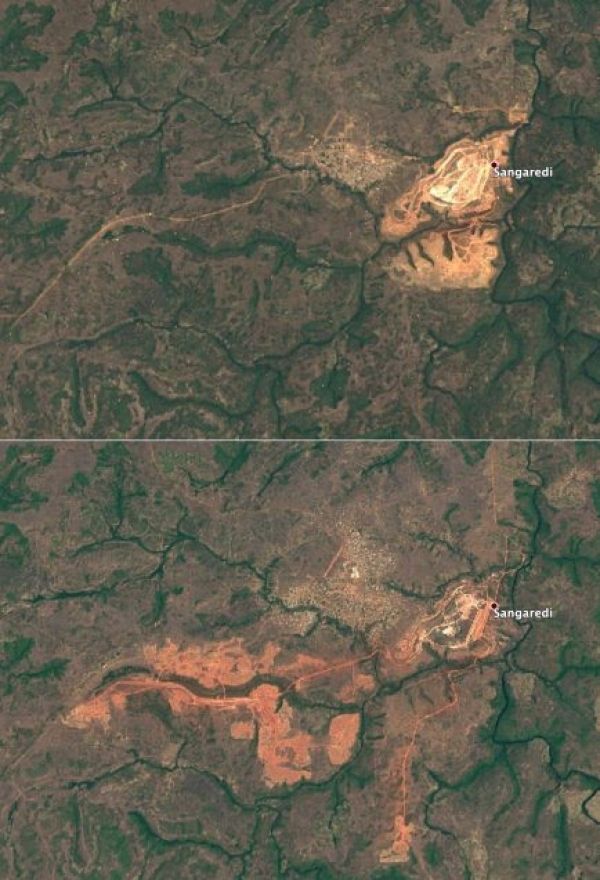 The rapid expansion of the bauxite industry has come at a cost to both humans and the environment.

In western Guinea, near where the Tinguilinta River meets the Atlantic Ocean, a concrete jetty extends about 275 meters into the river’s channel. The jetty is equipped with a conveyor belt system, which facilitates the transport of crushed and dried bauxite — the primary ore used in the production of aluminum — from pier-side stockpiles to docked ships for export. Behind the jetty, gaseous and particulate emissions pour out of a smokestack. Meanwhile, bauxite dust drifts towards the neighboring town of Kamsar, where residents link the bauxite plant’s operations to health effects such as respiratory diseases.

Trains rest on tracks near Kamsar’s port after completing their 120-km long journey from the mining area in Sangaredi. Five to seven trains, each equipped with 120 wagons, leave that mine every day. Each wagon contains around 82 tons of bauxite ore, amounting to between 49,200 and 68,800 tons of bauxite shipped, by railway alone, daily. These are the operations of just one mining company and do not account for the truckloads of bauxite moving through the same territory each day. Several other companies have also taken up residence in western Guinea, particularly in the Boké region, in the pursuit of bauxite.

Guinea holds the world’s largest reserves of bauxite. In fact, Guinea’s Ministry of Mines estimates that reserves of bauxite across the country total over 40 billion tons. Since 2013, several major investment agreements have resulted in the arrival of a number of industrial players seeking to capitalize on the vast bauxite reserves located in Guinea.