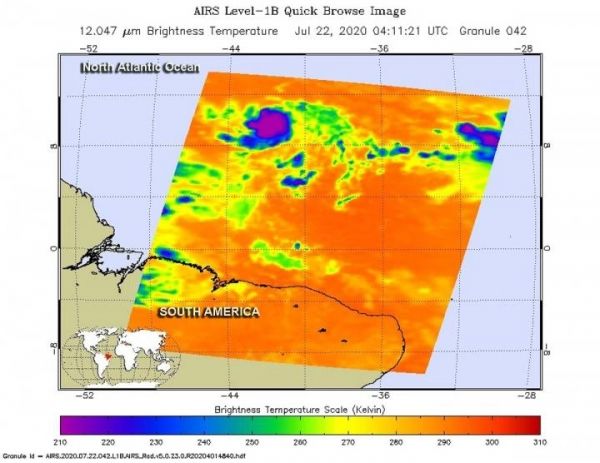 The seventh named tropical cyclone of the North Atlantic Ocean has formed, and like some others this season, it has broken a record.

The seventh named tropical cyclone of the North Atlantic Ocean has formed, and like some others this season, it has broken a record. NASA’s Aqua satellite provided a look at the small record-breaker.

The National Hurricane Center (NHC) reports that Gonzalo is the earliest seventh named storm on record in the Atlantic basin, beating Gert of 2005 by 2 days. Tropical Depression Seven formed on July 21 by 5 p.m. EDT in the Central North Atlantic Ocean, and by 8:50 a.m. EDT on July 22 it strengthened into a tropical storm and was renamed Gonzalo.

One of the ways NASA researches tropical cyclones is using infrared data that provides temperature information. The AIRS instrument aboard NASA’s Aqua satellite captured a look at those temperatures in Gonzalo and gave insight into the size of the storm and its rainfall potential.

Cloud top temperatures provide information to forecasters about where the strongest storms are located within a tropical cyclone. Tropical cyclones do not always have uniform strength, and some sides have stronger sides than others. The stronger the storms, the higher they extend into the troposphere, and the colder the cloud temperatures. NASA provides that data to forecasters at NOAA’s National Hurricane Center or NHC so they can incorporate it in their forecasting.