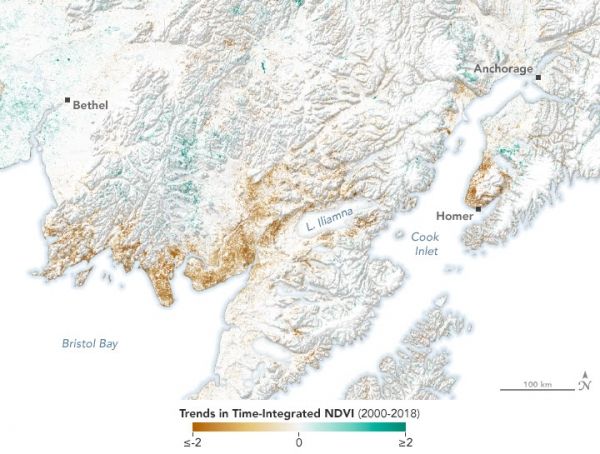 Tree and plant cover has deteriorated considerably in some areas, while advancing in other areas that previously burned or used to be frozen.

Over the past two decades, vegetation across Alaska has displayed some dramatic changes. But the patterns are complex, with plants and trees thriving in many parts of the state while degenerating rapidly in the coastal southwest.

“Many regions of Alaska are experiencing a high level of year-to-year variability in the seasonality of vegetation growth—among the highest in the world—and probably due to climate change,” said Christopher Potter, an ecologist at NASA’s Ames Research Center. Potter and colleagues described these transformations in a paper published in May 2020 in the journal Remote Sensing.

The changes are apparent on the maps on this page, which show where vegetation has increased (greened) or decreased (browned) during the summer growing seasons between 2000 and 2018. Data for the maps are a summation from the Normalized Difference Vegetation Index (NDVI), which uses data from the MODIS instrument on the Terra satellite to measure the productivity or “greenness” of vegetation based on the differences in red and near-infrared radiation that they reflect.