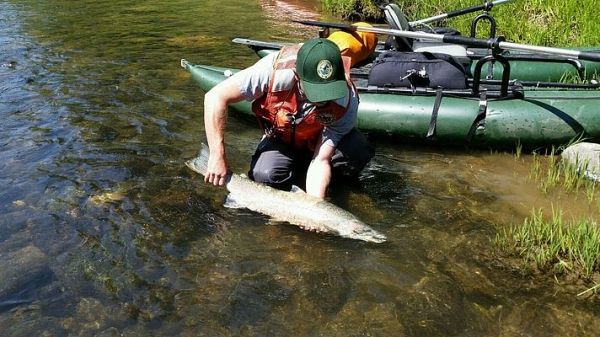 Steelhead trout (Oncorhynchus mykiss) stir up the sediment of the river bed when building their spawning pits, thus influencing the composition of the river bed and the transport of sediment.

Until now, this process could only be studied visually, irregularly and with great effort in the natural environment of the fish. Now, researchers led by Michael Dietze of the GFZ German Research Centre for Geosciences in Potsdam have used seismic sensors (geophones) to analyze the trout’s nest-building process in detail. The study was published in the journal Earth Surface Processes and Landforms.

To lay their eggs, trout use their caudal fins to dig pits up to three metres long on each side and ten centimetres deep into the river bed. The aim of the researchers was to locate these spawning pits and to analyze the chronological sequence of the construction process. To this end, the researchers set up a network of seismic stations on a 150-meter section of the Mashel River in the US state of Washington. The geophones embedded in the earth are highly sensitive and detect the slightest vibrations in the ground. Small stones moved by the fish caused short frequency pulses in the range of 20 to 100 hertz and could be distinguished from background frequencies of flowing water, raindrops and even the pulses of passing airplanes. "The same signal arrives at each of the stations slightly delayed. This enabled us to determine where the seismic wave was generated," says Dietze, first author of the study.