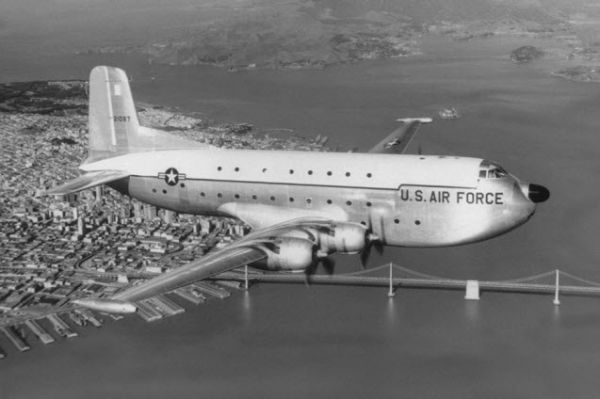 In June this summer, a team of military personnel touched down on Alaska’s Colony Glacier with a somber mission: to recover newly unthawed wreckage and human remains from a fatal Cold War-era plane crash.

The plane, en route to Elmendorf Air Force Base in Anchorage, Alaska, went down during a period of rapid militarization in the soon-to-be state. Now, the search for remains draws eerie parallels between Arctic militarism in 1952 and today.

Nicknamed “Old Shaky” for its tendency to vibrate during flight, the enormous Douglas C-124 Globemaster II departed from McChord Air Force Base in Tacoma, Washington early on November 22, 1952. The 52 U.S. military service members aboard the flight never made it to Elmendorf. On the day of the crash, weather near Anchorage was severe, with dense fog and swirling snow obscuring visibility. According to Robert Orlove, a master aviation mechanic and cousin of GlacierHub editor Ben Orlove, landing at a nearby diversion airport was impossible, forcing the pilot to resort to an instrument approach to Anchorage. Under instrument flight conditions, characterized by poor weather, pilots must navigate without outside visual references. However, the flight was equipped only with a radio beacon receiver, barometric altimeter to gauge altitude, and a stopwatch as a means to find the runway. Less than 60 miles from its destination, the plane crashed into the side of Mount Gannett and left no survivors.

Six days passed before the weather permitted a search team to survey the site of the crash. The plane was assessed to have flown into Mount Gannett at full speed, making impact at an elevation of 8,000 feet. In addition to eight feet of fresh snow covering the wreckage, the impact of the crash is thought to have triggered an avalanche that further entombed the debris.