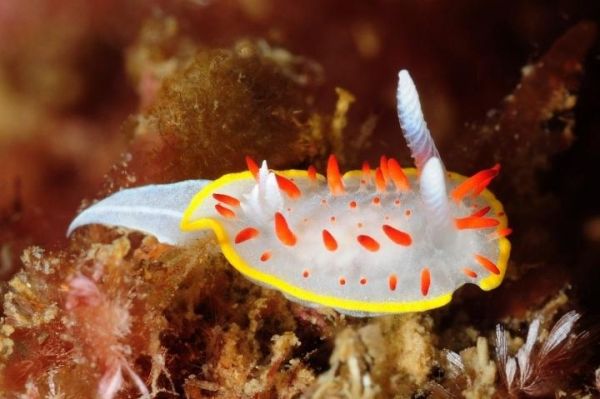 A study on marine biodiversity has identified seventy-three species of sea slugs in the coasts of Barcelona, an anthropized environment due to the urban metropolis.

A study on marine biodiversity has identified seventy-three species of sea slugs in the coasts of Barcelona, an anthropized environment due to the urban metropolis. In this group of gastropod molluscs, the most abundant in the urban coasts are sea hares, according to the article coordinated by the tenure university lecturer Manuel Ballesteros, from the Faculty of Biology and the Biodiversity Research Institute (IRBio) of the University of Barcelona.

This is one of the few ecological studies on these species in port cities in the Mediterranean and it is published in the Gazette of the Catalan Institution of Natural History (BICHN, 2020), an entity from the Institute for Catalan Studies (IEC). Other coautors of the study are the experts Àlex Parera, from the Faculty of Biology of the UB; Miquel Pontes, from the VIMAR Study Group, and Xavier Salvador, from the Catalan Opisthobranchs Research Group (GROC).

City catalogue of opisthobranchs in the Barcelona coasts

The marine invertebrates traditionally known as opisthobranchs –nowadays heterobranchia– gather a wide group of gastheropod molluscs –nudibranchs, sea hares, sacoglossa, sea butterflies, etc. – with polyphyletic origins. These are abundant in marine areas where it is easy to find their food –usually an only species of animal or algae– and show a high biodiversity in marine ecosystems with varied habitats (rocks, sandy floors, etc.).

Read more at University of Barcelona

Image: The degradation or damage of marine habitats is a global threat for the biodiversity of heterobranchia. (Credit: Miquel Pontes, VIMAR Study Group)