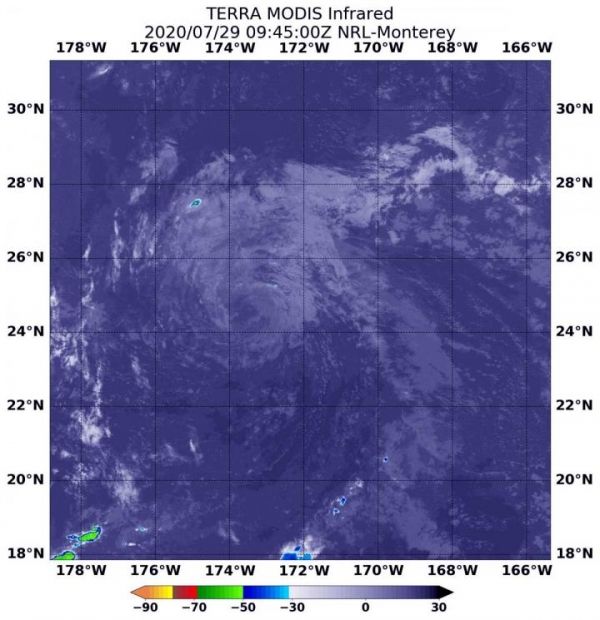 Strong wind shear has been the undoing of Tropical Storm Douglas.

One Warning Remains for Douglas

On July 29, a Tropical Storm Warning is in effect for portions of the Papahanaumokuakea Marine National Monument from Maro Reef to Lisianski.

NASA’s Terra satellite uses infrared light to analyze the strength of storms by providing temperature information about the system’s clouds. The strongest thunderstorms that reach high into the atmosphere have the coldest cloud top temperatures. However, cloud tops in Douglas showed no very cold cloud tops on July 29 at 5:45 a.m. EDT (0945 UTC) when they were imaged by the Moderate Resolution Imaging Spectroradiometer or MODIS instrument that flies aboard NASA’s Terra satellite.

Image: On July 29 at 5:45 a.m. EDT (0945 UTC), the MODIS instrument that flies aboard NASA's Terra satellite gathered infrared data on Douglas showing that persistent south to southwest vertical wind shear had taken its toll on the storm. There were no strong thunderstorms remaining. (Credit: NASA/NRL)