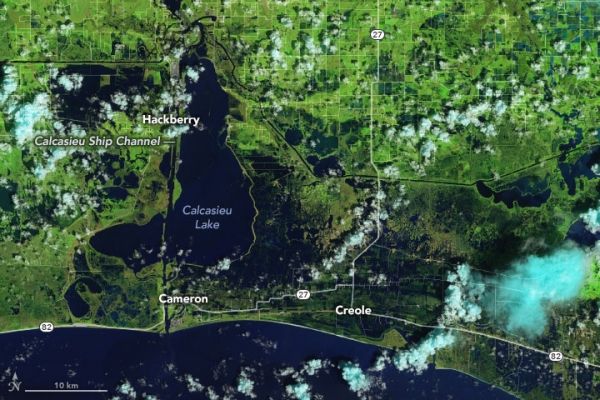 The storm surge and rainfall from the category 4 hurricane inundated parts of the Louisiana coast, while winds wiped out electric power to many.

Hurricane Laura was among the ten strongest hurricanes to ever make landfall in the United States. The scars are visible on the landscape of Louisiana and east Texas.

Laura made landfall as a category 4 storm late on August 26, 2020, bearing sustained winds of 150 miles (240 kilometers) per hour and storm surges ranging from 9 to 15 feet (3 to 5 meters). The storm dropped 5 to 10 inches of rain on several areas in Louisiana, Texas, and Arkansas. In the wake of the storm, the Operational Land Imager (OLI) on Landsat 8 acquired images of flooded coastal lands around the towns of Cameron and Creole, Louisiana, south of the city of Lake Charles (population 78,000).

The false-color images above were acquired on August 13 and 29, 2020. They were composed from a combination of shortwave infrared, near infrared, and natural color (bands 6-5-4) to make it easier to distinguish flooded areas (navy blue and black) from drier ground. Vegetation is bright green and clouds are cyan.