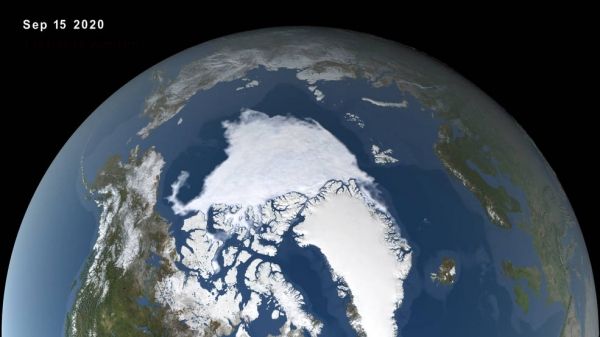 This year’s Arctic sea ice cover shrank to the second-lowest extent since modern record keeping began in the late 1970s.

An analysis of satellite data by NASA and the National Snow and Ice Data Center (NSIDC) at the University of Colorado Boulder shows that the 2020 minimum extent, which was likely reached on Sept. 15, measured 1.44 million square miles (3.74 million square kilometers).

In winter, frozen seawater covers almost the entire Arctic Ocean and neighboring seas. This sea ice undergoes seasonal patterns of change – thinning and shrinking during late spring and summer, and thickening and expanding during fall and winter. The extent of summer sea ice in the Arctic can impact local ecosystems, regional and global weather patterns, and ocean circulation. In the last two decades, the minimum extent of Arctic sea ice in the summer has dropped markedly. The lowest extent on record was set in 2012, and last year’s extent was tied for second – until this year’s.