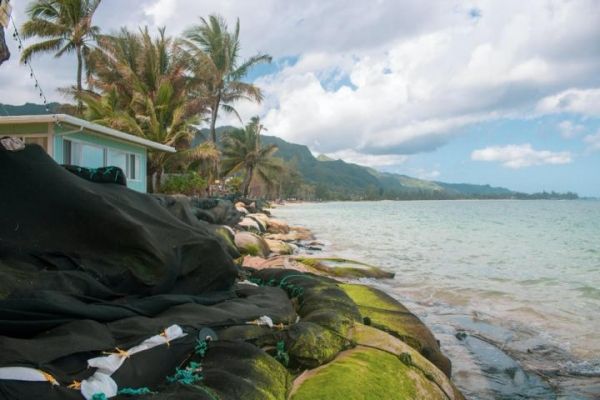 The reactive and piecemeal approach historically used to manage beaches in Hawai‘i has failed to protect them.

The reactive and piecemeal approach historically used to manage beaches in Hawai‘i has failed to protect them. If policies are not changed, as much as 40% of all beaches on Oʻahu, Hawai‘i could be lost before mid-century, according to a new study by researchers in the Coastal Geology Group at the University of Hawai‘i (UH) at Mānoa School of Ocean and Earth Science and Technology (SOEST).

In an era of rising sea level, beaches need to migrate landward, otherwise they drown. Beach migration, also known as shoreline retreat, causes coastal erosion of private and public beachfront property. Shoreline hardening, the construction of seawalls or revetments, interrupts natural beach migration—causing waves to erode the sand, accelerating coastal erosion on neighboring properties, and dooming a beach to drown in place as the ocean continues to rise.

The team of scientists, led by graduate researcher in the SOEST Department of Earth Sciences Kammie Tavares, assessed the shoreline around Oʻahu that would be most vulnerable to erosion under three scenarios of sea level rise—all estimated to occur before, and shortly after mid-century.

They identified the location and severity of risk of shoreline hardening and beach loss, and a potential timeline for the increase in erosion hazards. The most threatened properties fall into an “administrative erosion hazard zone,” an area likely to experience erosion hazards and qualify for the emergency permitting process to harden the shoreline.