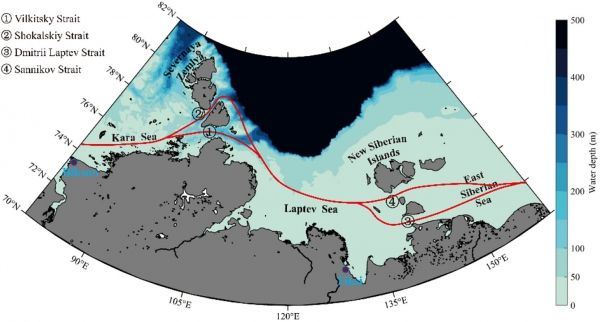 Since the 1970s, Arctic surface air temperature has likely increased by more than double the global average, and Arctic sea ice has undergone tremendous mass loss.

The sustained decrease of sea ice facilitates the accessibility of Arctic sea passages. Compared with the customary route through the Straits of Malacca and the Suez Canal, the Northeast Passage (NEP) can shorten the distance from Europe to northwestern Asia by about one-third, which would help to reduce the expense of transport and environmental pollution.

Recently, a research group led by Prof. KANG Shichang from the Northwest Institute of Eco-Environment and Resources of the Chinese Academy of Sciences, together with collaborators, reviewed the past changes in sea ice in September from 1988 to 2016 and assessed the future accessibility along the NEP 4.

According to the researchers, significant warming was presented in the deep layer in the Arctic seas along the NEP in recent decades (1988-2016). The positive anomaly of seawater temperature moved westward and increased notably in coastal areas.