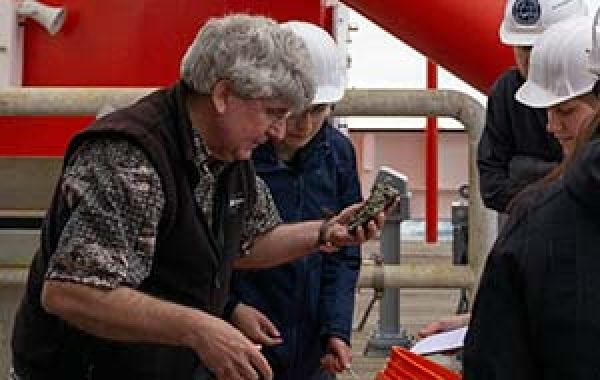 Michael Cheadle recently had the opportunity to view a large volcano up close. The novelty is that it was underwater.

Michael Cheadle recently had the opportunity to view a large volcano up close. The novelty is that it was underwater.

Cheadle, a University of Wyoming associate professor in the Department of Geology and Geophysics, was invited to be part of a research expedition that explored part of the seafloor of the Indian Ocean. Cheadle served as a geologist aboard a new German research vessel, called the R/V Sonne.

The research expedition, which took place during March, mapped nearly 6,000 square miles of the seafloor, an area slightly larger than the state of Connecticut, Cheadle says.

“We discovered a large volcano, which was 18 miles long and 1 mile high,” Cheadle says. “It was interesting because we could clearly see that it was a volcano that exploded, like those we see on the continents, such as Mount St. Helens, for example. But this type of explosive eruption is quite rare at the bottom of the ocean. We named the volcano Mount Mahoney after a famous U.S. geologist who worked on undersea volcanoes.”

Continue reading at University of Wyoming.