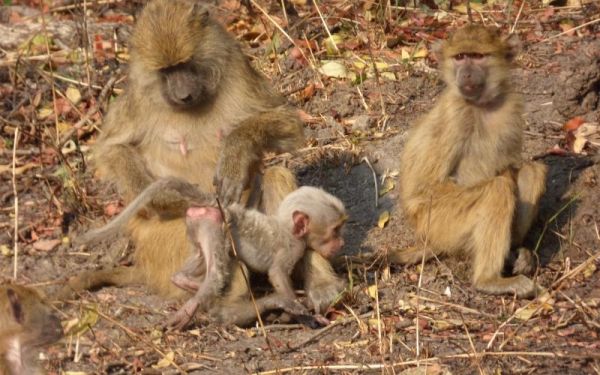 Ten years after anthropologist Anna Weyher started the Kasanka Baboon Project in Zambia, the program has become much more than a groundbreaking primate research program.

Ten years after anthropologist Anna Weyher started the Kasanka Baboon Project in Zambia, the program has become much more than a groundbreaking primate research program. Not only has the project led to revelatory observations about Kinda baboons, but it has also provided educational opportunities to young women in the villages near the 150-square mile Kasanka National Park and an increased awareness of the native wildlife and ecosystem among the members of the surrounding communities.

Until the launch of the project in 2010, when Weyher received a Fulbright Scholarship while earning her Master’s degree at Washington University in St. Louis, the behavior of the Kinda baboon (Papio kindae) had not been studied in the wild. Kinda baboons, smaller and more slender than other baboons, live in Angola and southern Democratic Republic of Congo, in addition to Zambia. Through the project, Weyher, now a doctoral candidate at the University of Massachusetts Amherst, has helped catalog a number of previously unknown details about the docile Kindas. Her published findings from the last decade include discoveries regarding the primates’ sexual selection, male-female grooming patterns, dominance and migration among males, seasonal variation in diet and ranging patterns and paternity and friendships.

“Typically, male baboons mostly pay attention to females when they’re sexually receptive and it’s the females that are really bonded together, spending a lot of time grooming and socializing with other females and their infants,” Weyher says. “When females are born into a group they inherit the rank of their mother and they stay within that group throughout their lives, and when males reach sexual maturity they leave to join another group.

Continue reading at University of Massachusetts.