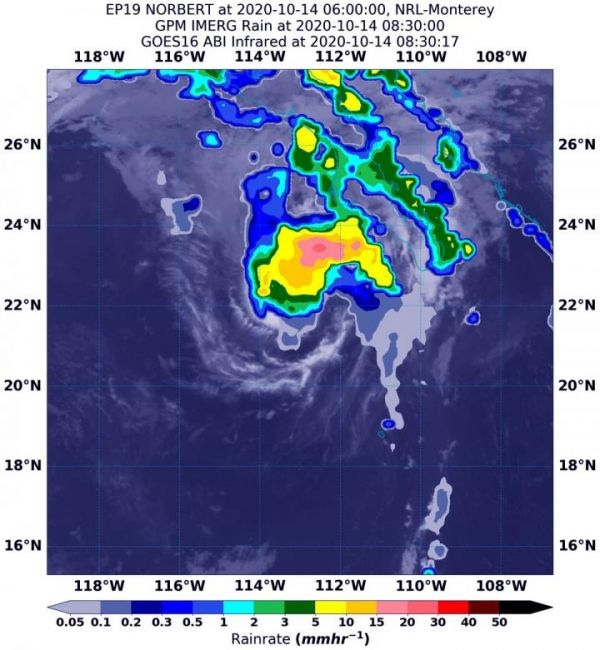 Norbert has been meandering around in the Eastern Pacific Ocean for several days as a tropical depression.

Norbert has been meandering around in the Eastern Pacific Ocean for several days as a tropical depression. A NASA satellite rainfall product that incorporates data from satellites and observations revealed that Norbert has regained tropical storm status after showing increased organization and deep convection.

At 11 p.m. EDT on Oct.13, Norbert regained tropical storm strength. At that time, the National Hurricane Center noted that Norbert had increased in organization during the evening hours and satellite data showed a tightly curved band of convection wrapping about halfway around the low-level center.
Norbert’s Status on Oct. 14

At 5 a.m. EDT (0900 UTC), the center of Tropical Storm Norbert was located near latitude 22.1 degrees north and longitude 113.3 degrees west. Norbert is moving toward the northwest near 15 mph (24 kph). A northwestward motion with a gradual decrease in forward speed is expected through tonight. Maximum sustained winds remain near 40 mph (65 kph) with higher gusts. Little change in strength is expected this morning, but the tropical storm is forecast to begin weakening by later today. Norbert is forecast to become a remnant low tonight or early Thursday, and dissipate by Thursday night.

On Oct. 14 at 4:30 a.m. EDT (0830 UTC), NASA's IMERG estimated Tropical Storm Norbert was generating as much as 30 mm(1.18 inches of rain [dark pink]) near the center of circulation. Rainfall throughout most of the storm was occurring between 5 and 15 mm (0.2 to 0.6 inches/yellow and green colors) per hour. The rainfall data was overlaid on infrared imagery from NOAA's GOES-16 satellite. (Photo Credit: NASA/NOAA/NRL)