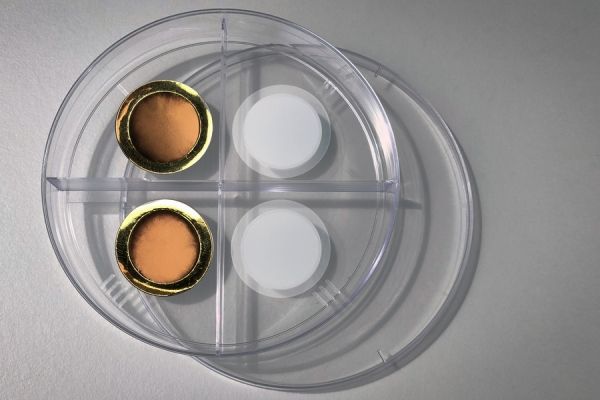 A new system developed by chemical engineers at MIT could provide a way of continuously removing carbon dioxide from a stream of waste gases, or even from the air.

A new system developed by chemical engineers at MIT could provide a way of continuously removing carbon dioxide from a stream of waste gases, or even from the air. The key component is an electrochemically assisted membrane whose permeability to gas can be switched on and off at will, using no moving parts and relatively little energy.

The membranes themselves, made of anodized aluminum oxide, have a honeycomb-like structure made up of hexagonal openings that allow gas molecules to flow in and out when in the open state. However, gas passage can be blocked when a thin layer of metal is electrically deposited to cover the pores of the membrane. The work is described today in the journal Science Advances, in a paper by Professor T. Alan Hatton, postdoc Yayuan Liu, and four others.

This new “gas gating” mechanism could be applied to the continuous removal of carbon dioxide from a range of industrial exhaust streams and from ambient air, the team says. They have built a proof-of-concept device to show this process in action.

The device uses a redox-active carbon-absorbing material, sandwiched between two switchable gas gating membranes. The sorbent and the gating membranes are in close contact with each other and are immersed in an organic electrolyte to provide a medium for zinc ions to shuttle back and forth. These two gating membranes can be opened or closed electrically by switching the polarity of a voltage between them, causing ions of zinc to shuttle from one side to the other. The ions simultaneously block one side, by forming a metallic film over it, while opening the other, by dissolving its film away.