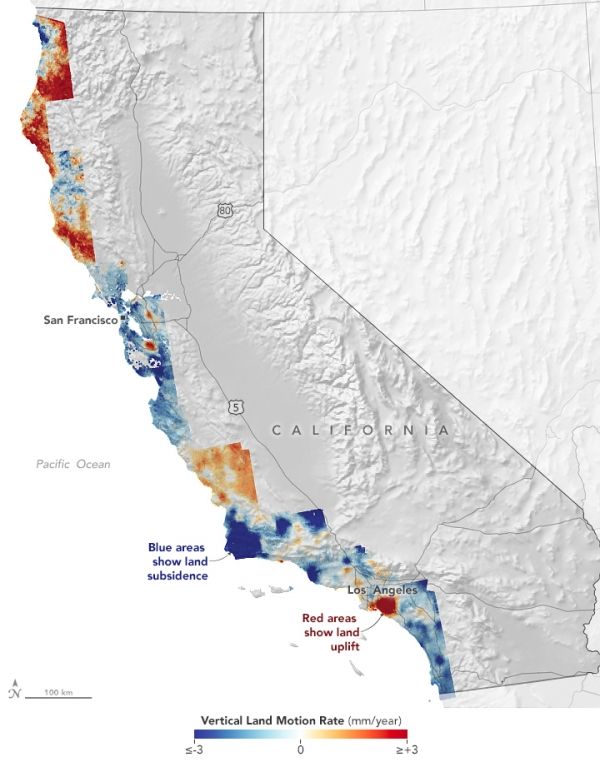 Millions of people in the state live in low-lying coastal areas where land subsidence is exacerbating the risks of sea level rise.

Global sea level has been rising at a rate of 0.1 inches (3.3 millimeters) per year in the past three decades. The causes are mostly the thermal expansion of warming ocean water and the addition of fresh water from melting ice sheets and glaciers. But even as the sea takes up more space, the elevation of the land is also changing relative to the sea.

What geologists call vertical land motion—or subsidence and uplift—is a key reason why local rates of sea level rise can differ from the global rate. California offers a good example of how much sea level can vary on a local scale.

“There is no one-size-fits-all rule that applies for California,” said Em Blackwell, a graduate student at Arizona State University. Blackwell worked recently with Virginia Tech geophysicist Manoochehr Shirzaei to estimate vertical land motion along California’s coast by analyzing radar measurements made by satellites. The research team—which also included Virginia Tech’s Susanna Werth and Geoscience Australia’s Chandrakanta Ojha—found that up to 8 million Californians live in areas where the land is sinking, including large numbers of people around San Francisco, Los Angeles, and San Diego.