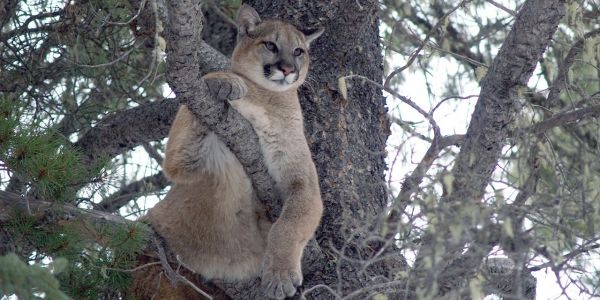 A study by University of Alberta biologists identifies three key factors for how cougars select habitats near roadways: traffic, topography and daylight.

A study by University of Alberta biologists identifies three key factors for how cougars select habitats near roadways: traffic, topography and daylight.

“Cougars will avoid roads if there is human activity or while there is daylight,” explained Mark Boyce, professor in the Department of Biological Sciences and Alberta Conservation Association Chair in Fisheries and Wildlife. “However, cougars will select habitat near roadways if there is good cover in terms of vegetation and topography or if the roads are remote.”

The researchers conducted the study in southwestern Alberta, collecting GPS data from 12 cougars to determine how the animals navigated areas with roadways. The results show that rough topography allows cougars to use areas close to roads, and that the animals are less likely to avoid roads with low traffic or during night hours.

“Conservation in North America has been remarkably successful at restoring cougars and other large carnivores. Now, we need to learn how to coexist,” said Boyce. “Previous research has shown that road placement and activity on roads can have a large influence on habitats for other animals such as grizzly bears and elk. This study shows that this holds true for cougars as well.”

Image via University of Alberta.