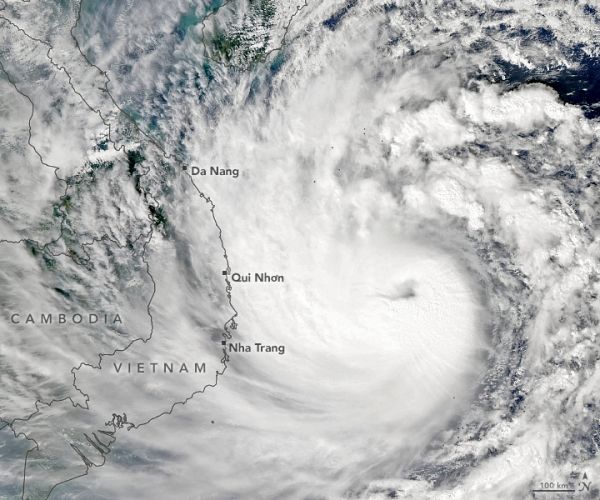 After getting pummeled by three deadly storms in October, Vietnam prepares for another one.

Vietnam has been pummeled by three deadly storms this October, causing the worst flooding in decades. Now, another powerful typhoon is headed toward the country.

Typhoon Molave was forecasted to make landfall in southern Vietnam on the morning of October 28, 2020. Meteorologists predicted that the storm would bring 100 to 200 millimeters (4 to 8 inches) of rain near landfall and could potentially trigger landslides in mountainous areas. Officials in Vietnam have ordered evacuations for more than a million residents. The storm may also bring rainfall to Thailand and the island of Hainan, China.

On October 27, 2020, the Moderate Resolution Imaging Spectroradiometer (MODIS) on NASA’ Aqua satellite captured this image of Molave as it crossed the South China Sea.