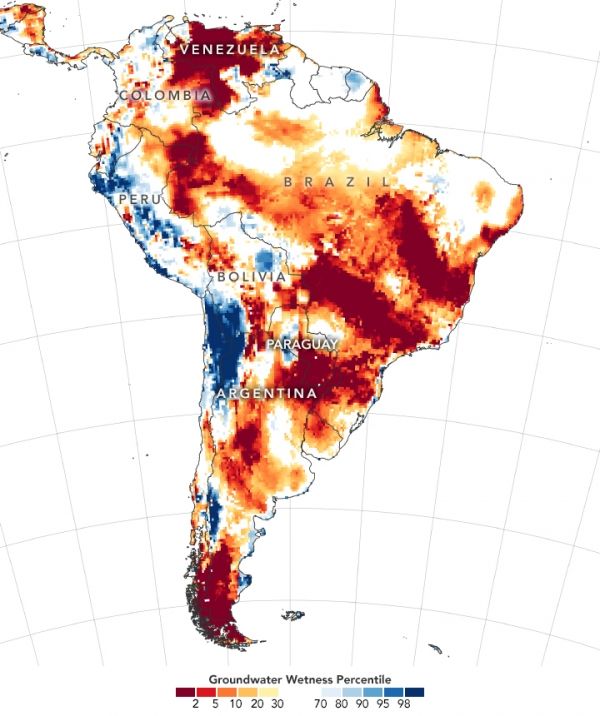 Satellite gravimetry data indicates the ongoing drought is the continent's second most intense since 2002.

Large parts of South America are in the grip of a serious drought. Signs of the drought began to appear in satellite gravimetry observations of southeastern Brazil in mid-2018, and had spread into parts of Paraguay, Bolivia, and northern Argentina by 2020.

“This is the second most intense drought in South America since 2002,” said Matthew Rodell, a hydrologist based at NASA’s Goddard Space Flight Center. “The calculation is based on the extent, duration, and volume of water lost during the drought as measured by the GRACE and GRACE-FO satellites.” A drought in eastern Brazil and Venezuela in 2015-16 is the only more intense drought on the record.

The map above shows shallow groundwater storage in South America on October 26, 2020, as measured by the Gravity Recovery and Climate Experiment Follow On (GRACE-FO) satellites. The colors depict the wetness percentile; that is, how the levels of groundwater compare to long-term records for October. Blue areas have more abundant water than usual, and orange and red areas have less. The darkest reds represent dry conditions that should occur only 2 percent of the time (about once every 50 years).