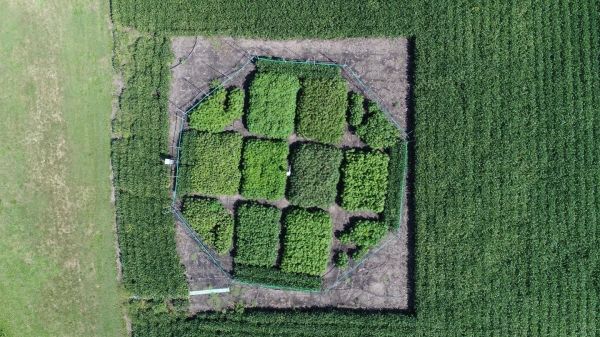 Carbon dioxide fuels photosynthesis, the process by which plants generate their food in the form of carbohydrates.

Carbon dioxide fuels photosynthesis, the process by which plants generate their food in the form of carbohydrates. The atmosphere’s carbon dioxide levels are rapidly increasing, but there is uncertainty about whether plants can turn these extra resources into higher yields while retaining nutritional quality.

A team from the University of Illinois and Monash University studied how the root crop cassava, which feeds over 1 billion people, will adapt to the amount of carbon dioxide expected by the second half of this century. They grew the crop in an outdoor research facility called SoyFACE that artificially boosts carbon dioxide to understand how increasing levels will impact crops in the coming decades.

This study is the result of a partnership between two international research projects that are supported by the Bill & Melinda Gates Foundation. Cassava Source-Sink is focused on improving the yield of cassava; Realizing Increased Photosynthetic Efficiency (RIPE) is improving photosynthesis to boost crop yields with support from the Gates Foundation, Foundation for Food and Agriculture Research, and U.K. Foreign, Commonwealth & Development Office.

In the Journal of Experimental Botany, they reported significant yield increases ranging from 22 to 39 percent in seven out of eight varieties of cassava. Each cultivar selected for the study is ‘farmer preferred’ in Africa, where cassava makes up a quarter or more of diets in several countries. Counter to past studies on other crops, they found no decrease in protein quality nor nitrogen content in the leaves, which are consumed by humans and livestock in addition to the starchy tubers.

Image: Aerial view of a field study at the University of Illinois SoyFACE research facility that examined how cassava (a staple root crop) will adapt to futuristic climate conditions. Researchers found yield increases ranging from 22 to 39 percent in seven out of eight varieties. (Credit: Beau Barber/RIPE project)