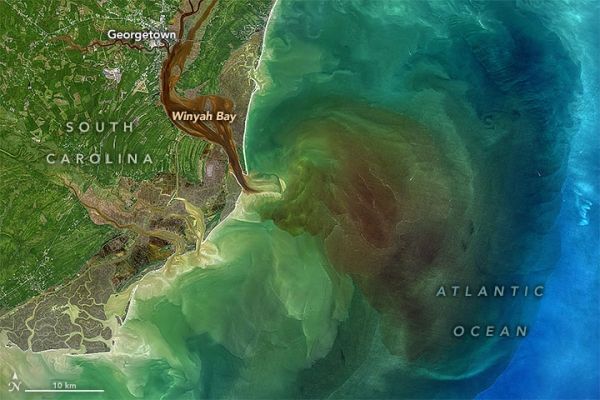 One of the first attempts to set up a permanent European colony in the contiguous United States ended in disaster.

Four blackwater rivers—the Waccamaw, Pee Dee, Black, and Sampit—feed into Winyah Bay, an estuary in eastern South Carolina. All of them flow through swamps, wetlands, and forests that are rich with decaying vegetation and other organic matter. The dead leaves and debris stain the rivers and wetlands a transparent brown color as several natural chemical substances found in plants—tannin, phenol, and humic acid—seep into the water. The same process gives tea its yellow or brown color.

After heavy rains, stained floodwaters can get flushed out of swamps and wetlands into the estuary and ocean. That was happening on October 1, 2020, when the Operational Land Imager (OLI) on Landsat 8 acquired this natural-color image of Winyah Bay. Many waterways were swollen following heavy rains from Hurricane Sally.