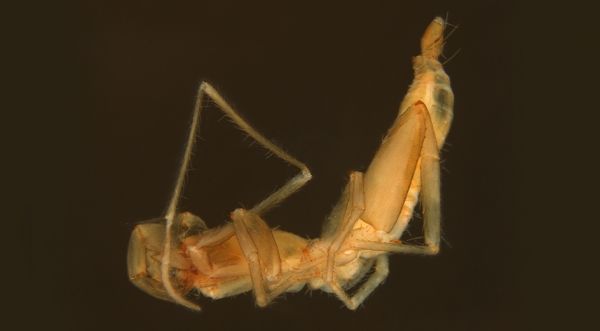 Researchers from The University of Western Australia and the Western Australian Museum have discovered 13 new species of the elusive ‘spricket’ in Australia’s north-west, a creature that looks like a cross between a spider and a cricket and is only around 3mm long and 0.5mm wide.

The new species belong to the genus Draculoides, named after Bram Stoker’s Dracula for their fang-like teeth, pale appearance, and predatory behaviour. The species’ names relate to famous vampire characters such as Draculoides akashae, named for the queen of the vampires in Anne Rice’s novels, and Draculoides belalugosii for actor Bela Lugosi who played Dracula in the movie Dracula.

There are approximately 400 species of sprickets worldwide, belonging to the order Schizomida, and are distant relatives of more familiar arachnids such as spiders and scorpions. The sprickets live their entire lives in underground habitats such as caves and small spaces in rock formations in the Pilbara. They do not have eyes and are pale with almost no pigment, which are adaptations of living in permanently dark environments.

Image via University of Western Australia.