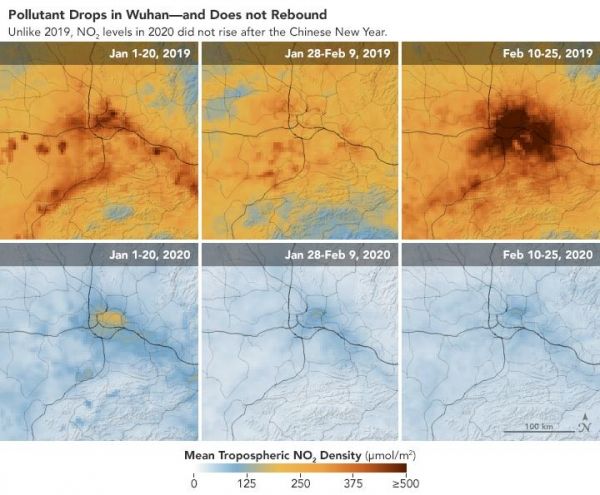 Since the COVID-19 pandemic began, space- and ground-based observations have shown that Earth’s atmosphere has seen significant reductions in some air pollutants.

Since the COVID-19 pandemic began, space- and ground-based observations have shown that Earth’s atmosphere has seen significant reductions in some air pollutants. However, scientists wanted to know how much of that decline can be attributed to changes in human activity during pandemic-related shutdowns, versus how much would have occurred in a pandemic-free 2020.

Using computer models to generate a COVID-free 2020 for comparison, NASA researchers found that since February, pandemic restrictions have reduced global nitrogen dioxide concentrations by nearly 20%. The results were presented at the 2020 International Conference for High Performance Computing, Networking, Storage, and Analysis.

Nitrogen dioxide is an air pollutant that is primarily produced by the combustion of fossil fuels used by industry and transportation—both of which were significantly reduced during the height of the pandemic to prevent the novel coronavirus from spreading.

Above image: Nitrogen dioxide levels often dip during Lunar New Year celebrations in China and much of Asia, and then rebound. But no rebound was evident this year over Wuhan, China where the virus was first reported, and nitrogen dioxide levels remained much lower than in 2019. More: https://earthobservatory.nasa.gov/images/146362/airborne-nitrogen-dioxide-plummets-over-china (Photo Credit: NASA's Earth Observatory)