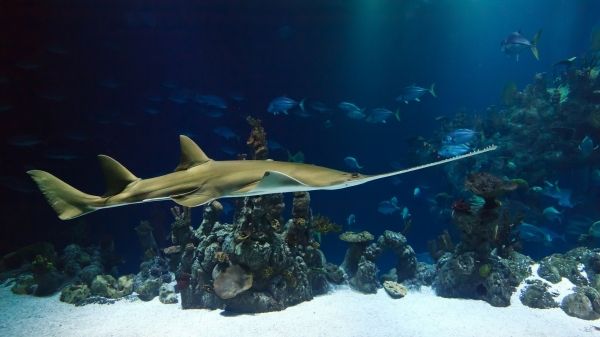 Capable of growing up to about 16 feet long, the elusive smalltooth sawfish (Pristis pectinata) is easily identified by its large, toothed rostrum or “saw.”

Capable of growing up to about 16 feet long, the elusive smalltooth sawfish (Pristis pectinata) is easily identified by its large, toothed rostrum or “saw.” It is one of five sawfish species worldwide, and the only sawfish species found in Florida waters. Historically found along the east coast of the United States and throughout the Gulf of Mexico, this species commonly inhabited Florida’s east and west coasts, including the Indian River Lagoon (IRL). Unfortunately, their population has drastically declined and they are currently listed as endangered under the U.S. Endangered Species Act.

In mid-September, researchers from Florida Atlantic University’s Harbor Branch Oceanographic Institute responded to a report of a juvenile smalltooth sawfish that had been caught by Florida Fish and Wildlife Conservation Commission (FWC) biologists while conducting their monthly fishery-independent monitoring sampling in the St. Lucie River. Matt Ajemian, Ph.D., an assistant research professor at FAU’s Harbor Branch and head of the Fisheries Ecology and Conservation (FEC) Lab, was contacted by the FWC team and sent Mike McCallister, research coordinator at FAU’s Harbor Branch, to assist in tagging the rare sawfish.

The female smalltooth sawfish measured 155 centimeters long (approximately 5 feet), including the saw. Based on this length, researchers confirmed that the immature animal was approximately 1 year old. They took a small fin-clip to perform DNA analyses, surgically implanted a 10-year acoustic transmitter, and affixed an external ID tag to a dorsal fin.