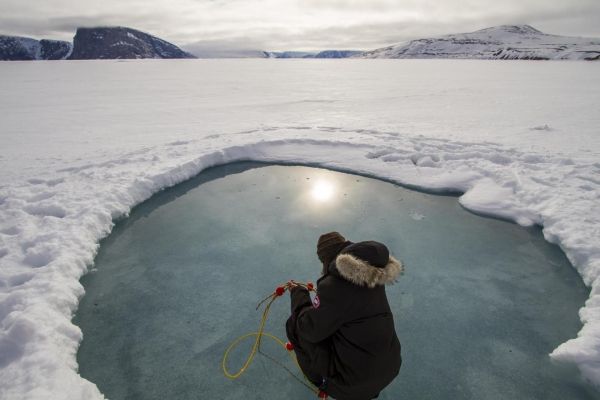 Small photosynthetic marine algae are a key component of the Arctic marine ecosystem but their role for the ecology of the Arctic Ocean have been underestimated for decades.

Small photosynthetic marine algae are a key component of the Arctic marine ecosystem but their role for the ecology of the Arctic Ocean have been underestimated for decades. That’s the conclusion of a team of scientists who synthesized more than half a century of research about the occurrence, magnitude and composition of phytoplankton blooms under Arctic sea ice. The results were published in a special issue of Frontiers in Marine Science devoted to Arctic Ocean research.

Phytoplankton are free-floating microscopic organisms, most of which are single-celled algae. Like terrestrial plants, they use photosynthesis to turn light into chemical energy by consuming carbon dioxide (CO2) and nutrients in the water. Phytoplankton are the basis of the marine food web and play a vital role in the carbon cycle by absorbing CO2 from the atmosphere.

Until roughly a decade ago, most scientists assumed that phytoplankton remained in a sort of stasis throughout the winter and spring until sea ice break-up. Now there is a growing body of evidence that suggests under-ice blooms (UIBs) of phytoplankton, like a sudden spring flowering in a garden, can occur in low-light environments below sea ice.

“There was a long-standing assumption that what was happening under the sea ice in the water column was almost ‘on pause’ during the polar night and before seasonal sea ice retreat, which is apparently not the case,” said lead author Mathieu Ardyna, a postdoctoral Marie Skłodowska-Curie fellow at Stanford University.