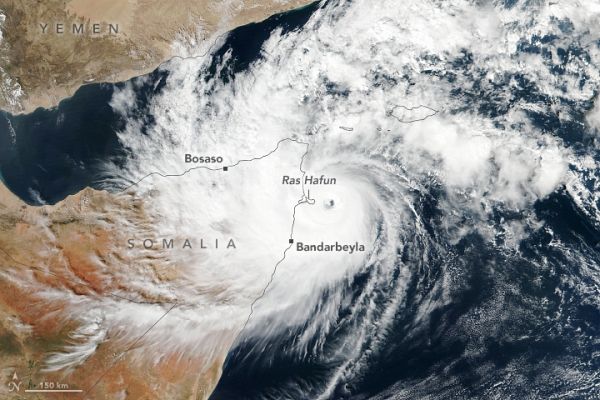 Cyclone Gati became the strongest storm to hit the country on record, bringing more than a year’s worth of rain in two days.

On November 22, 2020, Cyclone Gati became the strongest storm to hit Somalia since satellite records began five decades ago. Gati made landfall with maximum sustained winds of 170 kilometers (105 miles) per hour, a category 2 storm on the Saffir-Simpson scale. The storm brought more than a year’s worth of rain to the region in two days. Local authorities report at least eight people were killed and thousands have been displaced.

The natural-color image above shows Gati before making landfall over Ras Hafun (the easternmost point in Africa) on November 22. The image was acquired by the Visible Infrared Imaging Radiometer Suite (VIIRS) on the Suomi NPP satellite.

In 12 hours, Gati’s winds intensified from 65 kilometers (40 miles) to 185 kilometers (115 miles) per hour—the largest 12-hour increase for any tropical storm ever recorded in the Indian Ocean. The storm rapidly intensified due to its small size, warm Indian Ocean waters, and low wind shear. Although the storm slightly weakened before landfall, Gati brought exceptional amounts of rain to northern Somalia.