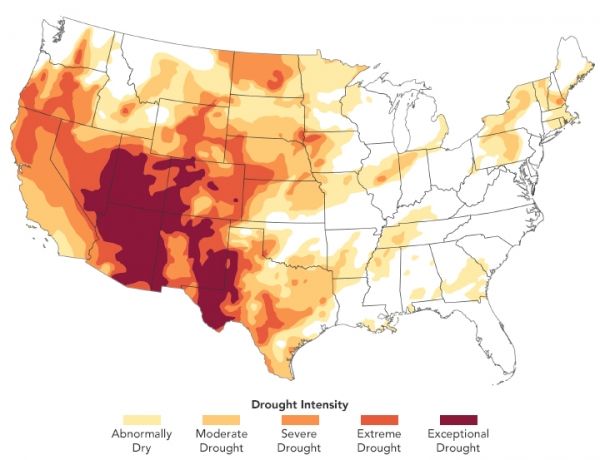 A serious drought has flared up across half of the United States—a familiar story for the past two decades.

A drought that flared up in the western United States in spring 2020 has expanded and intensified across the summer and fall. In August, a third of the United States was experiencing at least a moderate level of drought. By December, roughly half of that area was, with about 33 percent facing what the U.S. National Drought Monitor classifies as “extreme” or “exceptional drought.” Initially, Colorado, Utah, Nevada, and northern California faced the most severe conditions. Over the summer and fall, the drought intensified in Arizona and New Mexico and spread onto the Great Plains and Texas.

The map above, built with data from the Drought Monitor, depicts areas of drought in progressive shades of orange to red on December 8, 2020. It is based on measurements of climate, soil, and water conditions from more than 350 federal, state, and local observers around the country. NASA provides experimental measurements and models to this drought monitoring effort.

“Compared to late 2019 and early 2020, when there was very little drought in the continental United States, this is quite an extreme single-year event that developed rapidly over the course of 2020,” said Benjamin Cook, a climate scientist at NASA’s Goddard Institute for Space Studies.