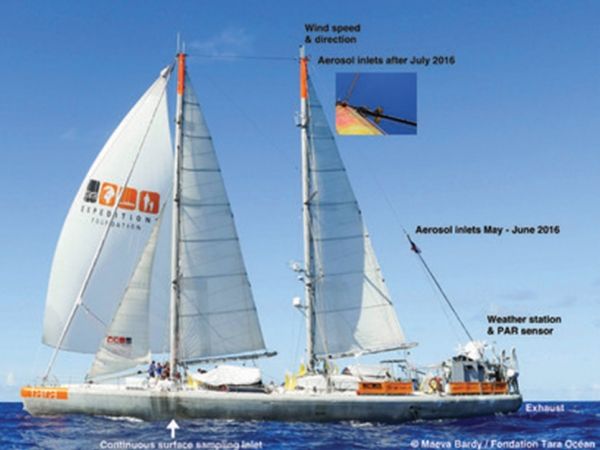 As the plastic in our oceans breaks up into smaller and smaller bits without breaking down chemically, the resulting microplastics are becoming a serious ecological problem.

As the plastic in our oceans breaks up into smaller and smaller bits without breaking down chemically, the resulting microplastics are becoming a serious ecological problem. A new study at the Weizmann Institute of Science reveals a troubling aspect of microplastics – defined as particles smaller than 5 mm across. They are swept up into the atmosphere and carried on the wind to far-flung parts of the ocean, including those that appear to be clear. Analysis reveals that such minuscule fragments can stay airborne for hours or days, spreading the potential to harm the marine environment and, by climbing up the food chain, to affect human health.

“A handful of studies have found microplastics in the atmosphere right above the water near shorelines,” says Dr. Miri Trainic, in the groups of Prof. Ilan Koren, of the Institute’s Earth and Planetary Sciences Department and Prof. Assaf Vardi of the Institute’s Plant and Environmental Sciences Department. “But we were surprised to find a non-trivial amount above seemingly pristine water.”

Koren, Vardi and Prof. Yinon Rudich of the Institute’s Earth and Planetary Sciences Department have been collaborating for a number of years on studies designed to understand the interface between ocean and air. While the way the oceans absorb materials from the atmosphere has been well studied, the opposite-direction’s process – aerosolization, in which volatiles, viruses, algal fragments and other particles are swept from seawater into the atmosphere – had been much less investigated.

Image: The research setup included an intake at the top of the mast. The Tara research schooner, 2016. The Bulletin of the American Meteorological Society