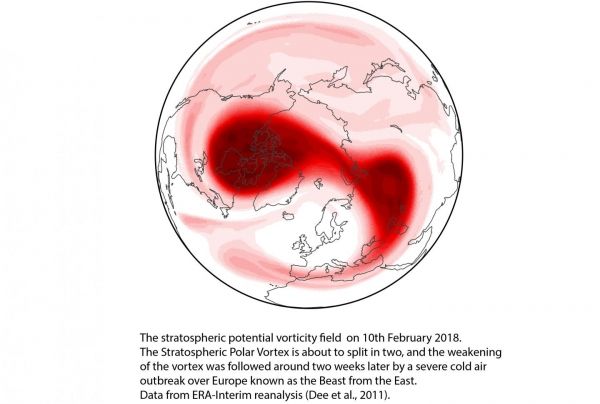 The stratosphere is the layer of the atmosphere from around 10-50km above the earth’s surface. SSW events are some of the most extreme of atmospheric phenomena and can see polar stratospheric temperature increase by up to 50°C over the course of a few days. Such events can bring very cold weather, which often result in snowstorms.

The infamous 2018 “Beast from the East” is a stark reminder of what an SSW can bring. The disturbance in the stratosphere can be transmitted downward and if this continues to the earth’s surface, there can be a shift in the jet stream, leading to unusually cold weather across Europe and Northern Asia. It can take a number of weeks for the signal to reach the surface, or the process may only take a few days.

Read more at: University of Bristol

The stratospheric potential vorticity field on 10th February 2018. The Stratospheric Polar Vortex is about to split in two, and the weakening of the vortex was followed around two weeks later by a severe cold air outbreak over Europe known as the Beast from the East. Data from ERA-Interim reanalysis (Dee et al., 2011). (Photo Credit: University of Bristol)