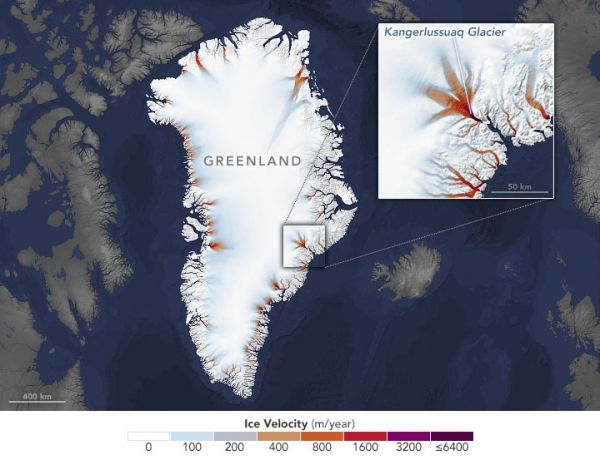 At least 200 of the island’s coastal glaciers have retreated over the past 20 years.

A recent study of Greenland’s ice sheet found that glaciers are retreating in nearly every sector of the island, while also undergoing other physical changes. Some of those changes are causing the rerouting of freshwater rivers beneath the ice.

In a study led by Twila Moon of the National Snow and Ice Data Center, researchers took a detailed look at physical changes to 225 of Greenland’s ocean-terminating glaciers—narrow fingers of ice that flow from the ice sheet interior to the ocean. They found that none of those glaciers has substantially advanced since the year 2000, and 200 of them have retreated.

The map at the top of this page shows measurements of ice velocity across Greenland as measured by satellites. The data were compiled through the Inter-mission Time Series of Land Ice Velocity and Elevation project (ITS_LIVE), which brings together observations of glaciers collected by multiple Landsat satellites between 1985 and 2015 into a single dataset open to scientists and the public.