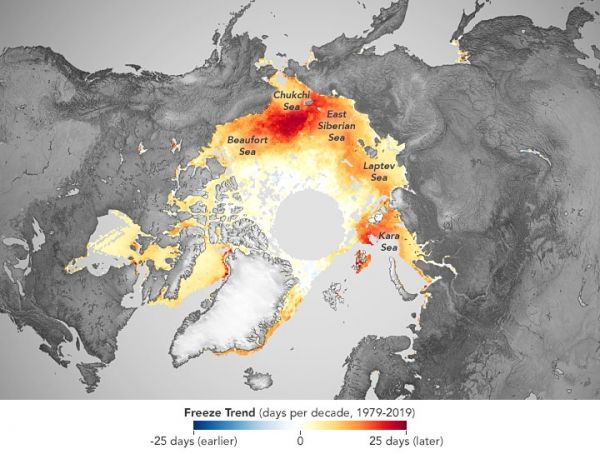 Forty years of satellite data show that 2020 was just the latest in a decades-long decline of Arctic sea ice.

Throughout 2020, the Arctic Ocean and surrounding seas endured several notable weather and climate events. In spring, a persistent heatwave over Siberia provoked the rapid melting of sea ice in the East Siberian and Laptev Seas. By the end of summer, Arctic Ocean ice cover melted back to the second-lowest minimum extent on record. In autumn, the annual freeze-up of sea ice got off to a late and sluggish start.

But any single month, season, or even year, is just a snapshot in time. The long view is more telling, and it is troubling.

Forty years of satellite data show that 2020 was just the latest in a decades-long decline of Arctic sea ice. In a review of scientific literature, polar scientists Julienne Stroeve and Dirk Notz outlined some of these changes: In addition to shrinking ice cover, melting seasons are getting longer and sea ice is losing its longevity.