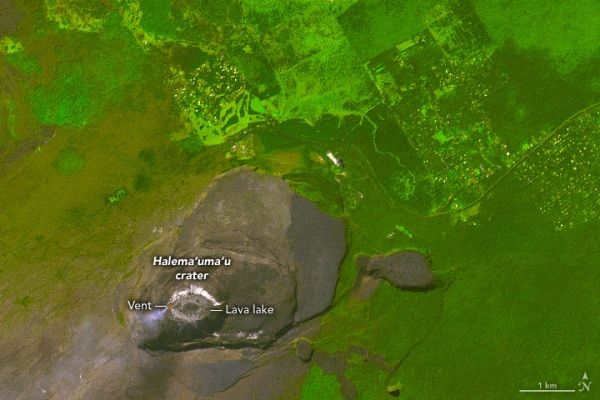 Water that had pooled in the crater since 2019 quickly boiled off during an eruption that began in December 2020.

After two years of quiet, Kilauea, Hawaii’s youngest and most active volcano, is erupting again. In the early days of the volcano’s latest eruption, water that had pooled in the volcano’s summit crater (Halema‘uma‘u) since July 2019 was replaced by a lava lake. The water boiled off on December 20, 2020, after the new eruption opened three fissures on the walls of the crater and poured lava into the lake.

The Advanced Spaceborne Thermal Emission and Reflection Radiometer (ASTER) on NASA’s Terra satellite acquired a false-color image of the crater and lava lake on December 28, 2020. A vent where lava is flowing into the crater appears red. A thin crust of cooling volcanic material floating on the lava makes the surface appear gray, and there is darker “island” of more solidified material floating in the center of the lava lake. A small, plume of steam and other volcanic gases is visible rising from a vent on the western wall of the crater.

The lava lake has grown considerably since December, reaching a volume of 35 million cubic yards (27 million cubic meters) and measuring 192 meters (630 feet) deep by January 6. Beginning on January 2, a small area of upwelling called a “dome fountain” broke through the crust coating the lava lake.