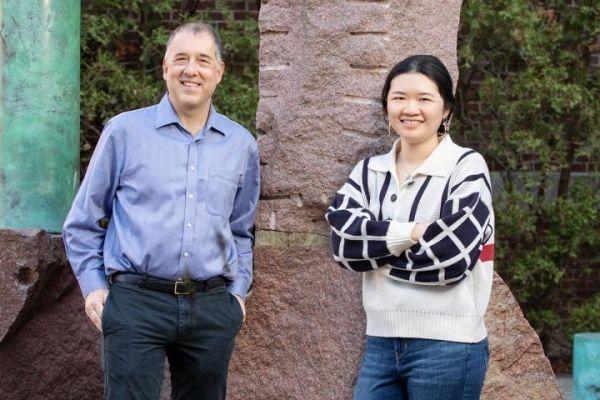 For years, researchers have worked to repurpose excess atmospheric carbon dioxide into new chemicals, fuels and other products traditionally made from hydrocarbons harvested from fossil fuels.

For years, researchers have worked to repurpose excess atmospheric carbon dioxide into new chemicals, fuels and other products traditionally made from hydrocarbons harvested from fossil fuels. The recent push to mitigate the climactic effects of greenhouse gases in the atmosphere has chemists on their toes to find the most efficient means possible. A new study introduces an electrochemical reaction, enhanced by polymers, to improve CO2-to-ethylene conversion efficiency over previous attempts.

The results of the study led by University of Illinois Urbana-Champaign chemistry professor Andrew Gewirth and graduate student Xinyi (Stephanie) Chen are published in the journal Natural Catalysis.

Allowing CO2 gas to flow through a reaction chamber fitted with copper electrodes and an electrolyte solution is the most common method researchers use to convert CO2 to useful carbon-containing chemicals, the study reports.

“Copper metal is highly selective toward the type of carbon that forms ethylene,” Gewirth said. “Different electrode materials will produce different chemicals like carbon monoxide instead of ethylene, or a mix of other carbon chemicals. What we have done in this study is to design a new kind of copper electrode that produces almost entirely ethylene.”

Read more at University of Illinois at Urbana-Champaign, News Bureau