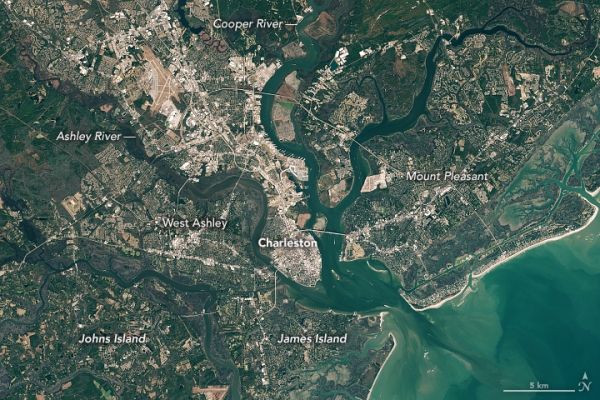 Sea level rise and new development are on a collision course in South Carolina lowcountry.

With its population rising three times faster than the national average, the Charleston metropolitan area is among the fastest growing places in the United States.

Large tracts of coastal forests and farmland have been cleared and developed in recent decades to accommodate new residents to the area. The pair of natural-color Landsat images above—the first image from 1985 and the second from 2020—show some of the changes. Forests and marshes appear green; developed areas are gray. Places where widespread development has occurred include James Island, Johns Island, Daniel Island, West Ashley, and Mount Pleasant.

A similar story is playing out in cities all across the United States, but the Charleston area stands out in one critical way—much of the new development has happened on low-lying land that is especially vulnerable to sea level rise and flooding. Older, more established parts of Charleston—often on slightly higher land but surrounded by water on three sides—faces similar challenges. As one form of remediation, local and federal government officials are moving forward with plans to build a seawall to protect the city’s historic downtown from encroaching water.