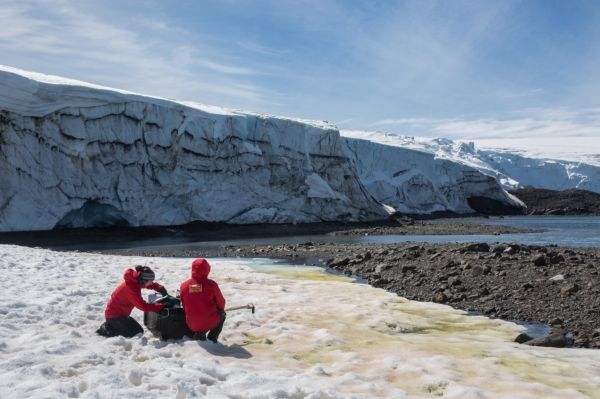 New research investigates the impacts of red and green algae on albedo and radiative forcing in Antarctica.

Red and green algae that grow on snow in the Antarctic Peninsula (AP) cause significant extra snowmelt on par with melt from dust on snow in the Rocky Mountains, according to a first-of-its-kind scientific research study led by Alia Khan, affiliate research scientist at the National Snow and Ice Data Center (NSIDC) and assistant professor at Western Washington University.

Algal blooms are likely to increase in Antarctica as the planet continues to warm, which will further exacerbate seasonal snowmelt and contribute to the expansion of ice-free areas in the AP region. This could have serious impacts on regional climate, snow and ice melt, freshwater availability and ecosystems, yet is not accounted for in current global climate models. Results of the research were published on January 13, 2021, in the European Geosciences Union’s The Cryosphere.

“Warming along the Antarctic Peninsula is causing drastic changes in snow and ice melt, as well as ecosystem responses,” said Khan. “We are seeing these algae blooms spread across wide areas along the coast. The blooms can be so intense and dark, like wearing a dark T-shirt on a sunny day, that they warm up the surface and cause more melting. The warming is likely expanding and strengthening the snow algae bloom season, which could continue to increase in this region of Antarctica as the climate continues to warm.”