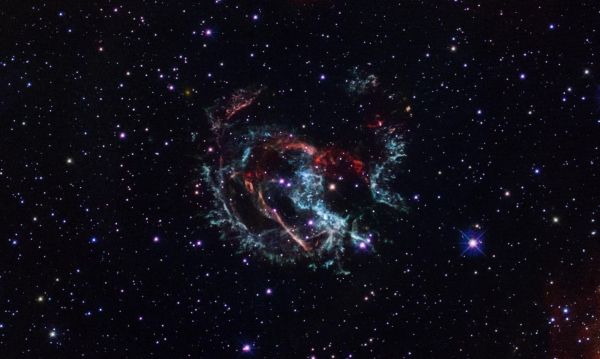 Astronomers are winding back the clock on the expanding remains of a nearby, exploded star.

Astronomers are winding back the clock on the expanding remains of a nearby, exploded star. By using NASA's Hubble Space Telescope, they retraced the speedy shrapnel from the blast to calculate a more accurate estimate of the location and time of the stellar detonation.

The victim is a star that exploded long ago in the Small Magellanic Cloud, a satellite galaxy to our Milky Way. The doomed star left behind an expanding, gaseous corpse, a supernova remnant named 1E 0102.2-7219, which NASA's Einstein Observatory first discovered in X-rays. Like detectives, researchers sifted through archival images taken by Hubble, analyzing visible-light observations made 10 years apart.

The research team, led by John Banovetz and Danny Milisavljevic of Purdue University in West Lafayette, Indiana, measured the velocities of 45 tadpole-shaped, oxygen-rich clumps of ejecta flung by the supernova blast. Ionized oxygen is an excellent tracer because it glows brightest in visible light.