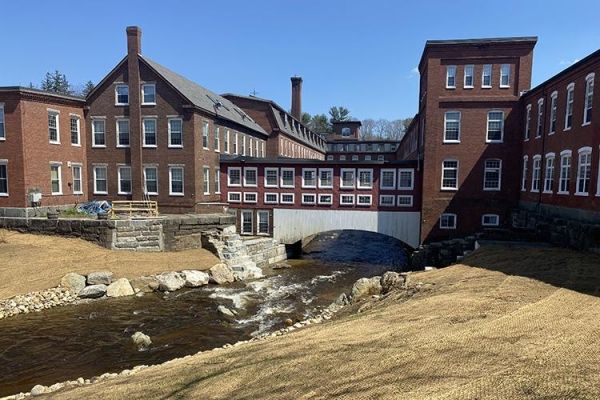 The removal of two dams along the Bellamy River has reduced the risk of flooding and reopened habitat for migratory fish.

After more than a decade of planning, the removal of the Upper and Lower Sawyer Mill Dams in Dover, New Hampshire, is complete. This NOAA-supported project has reopened river habitat for migratory fish and protected the residents of nearby apartments from flood risks associated with the two dams.

The Upper and Lower Sawyer Mill Dams were constructed on the Bellamy River in the 1800s. They generated power for Sawyer Woolen Mills, a textile mill complex along the banks of the Bellamy River. By the 1980s, the building complex had been converted to apartments, and the dams had outlived their original purpose.

With the surrounding buildings now home to hundreds of residents, the dams that once provided useful power generation had turned into a public safety hazard. The dams were found to not meet modern safety standards, meaning that a major storm could lead them to fail and flood the apartment complex. Extreme weather events and flooding are expected to become more frequent due to climate change. The risks posed by the dams were becoming more critical to address.