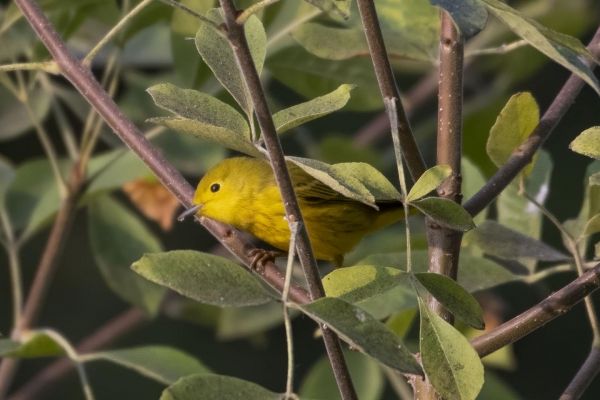 As climate change takes hold across the Americas, some areas will get wetter, and others will get hotter and drier.

As climate change takes hold across the Americas, some areas will get wetter, and others will get hotter and drier. A new study of the yellow warbler, a widespread migratory songbird, shows that individuals have the same climatic preferences across their migratory range. The work is published Feb. 17 in Ecology Letters.

“What’s amazing is that the birds track similar climates despite the fact that they have migrated thousands of miles,” said Rachael Bay, assistant professor in the Department of Evolution and Ecology, College of Biological Sciences at the University of California, Davis. “It seems that individual birds may be adapted to particular climate regimes.”

Yellow warblers (Setophagia petechia) breed throughout North America and fly south to Central and South America to spend the winter. A previous study by Bay and colleagues found links between genetic variation and precipitation across North America, suggesting that certain individuals might be adapted to dry conditions while others thrive in wet conditions. In the current study, the authors were able to use genetics to predict where birds captured on their wintering grounds in Central and South America would end up breeding and compare climate patterns in their winter and summer areas.

Yellow warblers are found throughout North America and fly to Central and South America for winter. Rachael Bay, assistant professor of evolution and ecology at UC Davis, and colleagues have found that individual birds show preferences for drier or wetter environments throughout the year and that this preference can be predicted from their genetics. (Photo Credit: Jonathan Eisen)