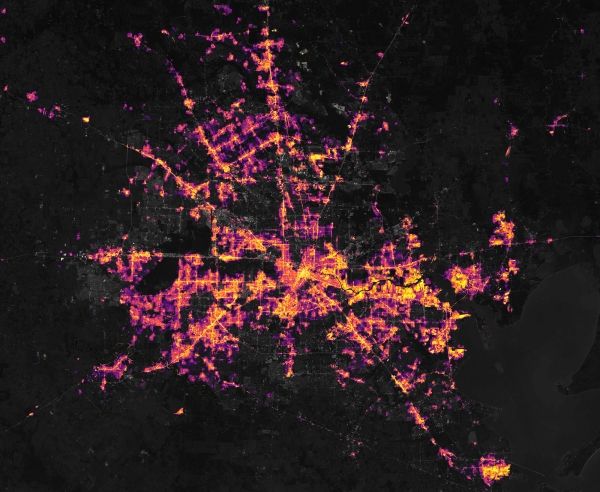 Texas and other central states set records for cold temperatures during a persistent blast of arctic air.

A potent arctic weather system chilled much of the United States with frigid weather in mid-February 2021, shattering low-temperature records in the middle of the country. The extreme cold combined with several snow and ice storms to leave millions of people without power.

Texas was hit particularly hard. According to news reports, natural gas shortages were already limiting power generation across Texas prior to the mid-February storm. Demand intensified after the polar air mass moved in on February 13, and controlled outages and downed power lines left parts of the state in the dark.

The Houston Chronicle reported that 4 million customers across the state were without power on February 15, including 1.4 million in the Houston area. Many of those outages continued into the next day and are apparent in the images above depicting nighttime lights. Satellite data for the right image was acquired around 1 a.m. Central Standard Time on February 16; the left image was acquired around the same time on February 7, prior to the severe cold spell. Nighttime lights data have been overlaid on Landsat imagery so that city structure can still be distinguished.