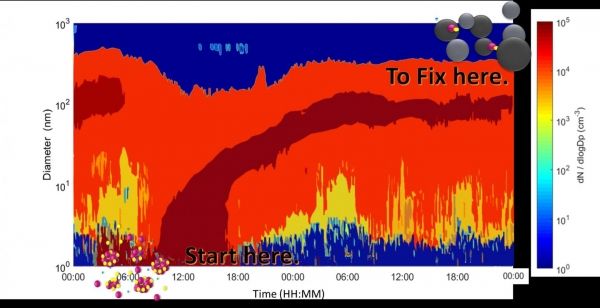 Atmospheric air pollution kills more than 10,000 people every day. The biggest threat to human health has been assumed to be the mass accumulation of atmospheric particles with diameter smaller 2.5 µm: the higher the mass and loss of visibility, the bigger the threat.

The researchers of the Institute for Atmospheric and Earth System Research (INAR) at the University of Helsinki together with collaborators in China discovered that if we want to solve the accumulation of the biggest particles, we need to start with the smallest.

Until recent studies, very little attention had been given to the ultrafine particles, smaller than 100 nm in diameter, since their weight and surface area are comparably negligible. It has been controversial whether these particles can grow to relevant sizes where they can affect visibility and human health.

“We found that the smallest particles matter the most”, says Academician Markku Kulmala from the Institute for Atmospheric and Earth System Research (INAR).

Read more at: University of Helsinki

Researchers followed the growth and chemical composition of the freshly formed particles until those reached sizes where they contribute to mass accumulation. (Photo Credit: Lubna Dada)