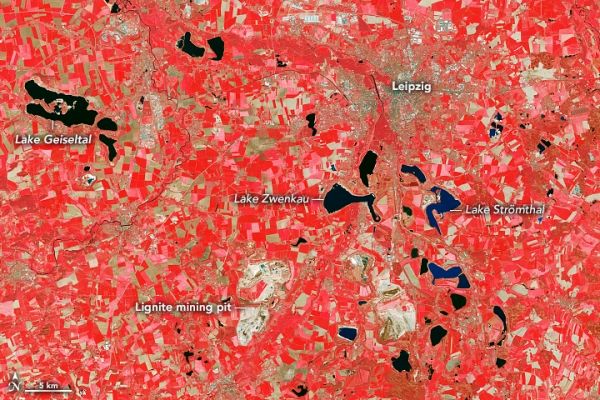 Once a center for mining brown coal, Central Germany is slowly transforming its pits to pools.

In the 1980s, a satellite flying over Central Germany would have observed many large open-pit mines extracting lignite, or brown coal, for power generation. But today, many of those pits are unrecognizable as they have been reclaimed to serve starkly different purposes.

Lignite mining started about 150 years ago in Central Germany, and the country became a top producer globally. In the 19th century, the surface mines were small and extractions were made by hand. As technology improved, the mines grew larger. While the coal helped provide necessary electricity, the mines took a toll on the surrounding environment. Lignite mining operations transformed about 1,770 square kilometers (680 square miles) of German countryside, disrupting land and water environments, causing people to move, and increasing greenhouse gases emissions.

Around the 1990s, some lignite mines in Central Germany began closing due to changes in policies, public concern, and the rise of other energy sources. Miners, local governments, nature conservationists, and water management experts then worked together to fill the mines with water to create recreation spots for people, habitats for aquatic animals and amphibians, water sources for wildlife, flood management, and more. The water to fill the lakes often came from nearby rivers, groundwater rebound, or water from dewatering operations from other still active mines. In all, at least 140 lignite mines have been flooded to create artificial “pit lakes” across Central Germany.