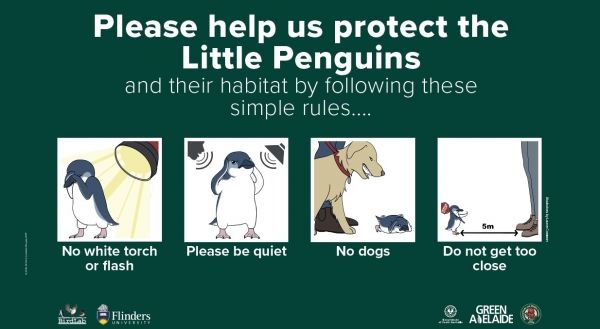 The fragile colony of Little Penguins on Granite Island will be safer thanks to new signage that better informs the public how to prevent the colony from being threatened by interfering behaviours.

Collaborating with the Department of Environment and Water and Green Adelaide, dedicated Flinders University researchers have designed new signs that identify intrusive human interactions as timely support for the struggling colony that had shrunk to only 16 animals in early 2020.

The signs were developed in response to an increase in human and dog disturbances on Granite Island since 2016. Specifically, disturbances at night increased from less than 2% of the monitored nights before 2016 to more than 20% of the nights in 2017 and onwards. Disturbances include unauthorised dogs (on or off leash), bikes and people wandering or actively searching for penguins using white torches or flashes (Colombelli-Négrel 2019, 2020).

The population of wild Little Penguins on Granite Island in South Australia has been the subject of intensive study by Flinders University researchers since 2012 – but this research was under threat during 2020 after disruptions to nightly monitoring of the penguins.